My internal apathetic agnostic is having a Real One right now.

In a year that has been full to bursting with third-party RPGs on Switch, Shin Megami Tensei V has a lot to live up to. It’s got five years of hype behind it, marks Atlus’s maiden effort with Unreal Engine, and is the major third-party game for Switch at holiday 2021 with a Pokemon game following the week after its launch. But for those who aren’t necessarily ready to rip through fantasy Japan with a land shark, you do have an alternative that lets you take gods, demons, and icy dolls through Tokyo.

Shin Megami Tensei V is quite possibly the most open world any Atlus RPG has ever had. Its size isn’t comparable to Xenoblade Chronicles X and the Fallouts of the world, but every square inch of the thoroughly nuked Tokyo has spots to explore. And much like XCX, I spent more time than I cared to admit just merrily jumping around trying to figure out just how to get a hold of that treasure. There are some spots in the first area of the game that show off an incredibly impressive draw distance for the Switch, and load times only come up for major area transitions. The review copy wasn’t perfect, though: there was an instance or two where the scene went to a ground texture and during a particularly bright cutscene later on, the text had some odd behavior. A day one patch will be available so they may not be in the version you’ll be playing—and there were some very specific circumstances with the ground texture zoom that it would be difficult to recreate.

Although SMTV starts out at a school, it quickly bounces you into the open world, and the school only gets used as a meeting place and briefly as a dungeon. Within 10-15 minutes, your self-named player character gets thrust into a wasteland version of Tokyo and has to start fighting against demons to try and save their hometown. In exchange, they get the ability to command demons and a FABULOUS hairdo. In addition to saving Tokyo, the character also has to make a choice that definitely felt familiar after playing SMT IV on 3DS and especially Nocturne earlier this year: there were plenty of times in which I spent several minutes trying to decide what text option I’d have to pick to avoid getting railroaded into an ending I didn’t want. The characters are mostly high school aged with a few adults of questionable utility along for the ride, but the only things that are sexualized are the obvious demons like Succubus and Mermaid. If you’re concerned about hitting what the boss would call “the Atlus line,” V avoids it with aplomb; the M rating is for violence, themes, and the inevitable Mara. 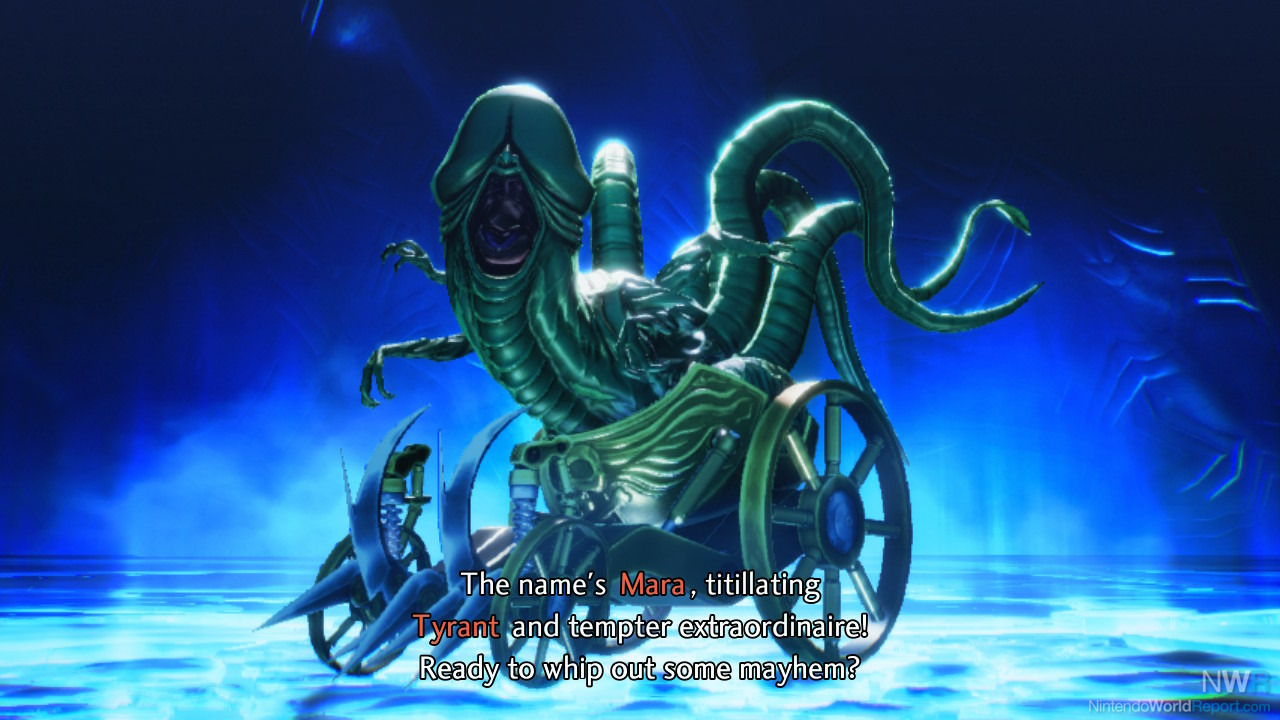 The minimum requirement for Mara is level 67… it would’ve been nice if it was two levels higher.

The combat system puts all of the demons on the map, and mission control will warn you when a major demon is about to show up. The turn-based “Press Turn” system returns, though it’s seemingly nerfed: at most, you get one additional turn per member of the party active and the party size caps at the player character and three demons. But this being an SMT game, the enemies have no such compunction: enemy encounters can get to as much as a 6-on-4 disadvantage, for instance. Demon negotiation is also present, and requires a bit of guesswork to navigate each of the monster’s personalities, but once you build up a good supply of demons you can get hooked into the incredibly addictive Fusion systems. Once I was able to build up a good supply of money, I was able to take advantage of the ability to fuse from the ingame Demon Compendium to really streamline the process of fusing demons. Previously, such as in SMT III, I would have to figure out a chain for a particular demon, summon components from the compendium if they weren’t present in my party, and then fuse the addition to get to the end goal. “Reverse Compendium Fusion” is a godsend for this, eliminating the first two steps of the process and simply making it possible to pick the killer star Decarabia and showing every possible combo plus giving the option to essentially buy it.

There were three difficulty options available in the review copy: Casual, Normal, and Hard. Hard is the default setting for people who played SMT II on the Japanese Super NES app for Switch Online, and can only be selected from the start of a file. If you pick Normal at any point, Hard is locked out permanently. But even Casual isn’t a cakewalk; if you’re looking for a tourist experience, you’ll probably want to pick “Safety,” when it’s available on launch day. Playing on Casual, I lost about 5-6 hours of progress from deaths—save points are frequent, but so is death. One particularly annoying sequence mid-game basically required me to take an afternoon to reset my character’s weaknesses, grind up completely new demons who also didn’t have those weaknesses, and then go through a two stage boss fight with the following factors:

So yes, we have a new entry in the “That One Boss” page. It’s not as bad as Nocturne was, but Nocturne is “That One Boss: The Role-Playing Game” so it doesn’t mean a whole lot.

Atlus made a big deal of the voice cast for SMT V pre-launch, and as well they should: there’s a lot of really good voice acting in the game. My only complaint is that there’s no option to play a female main character, and your mission control / possessor refers to the player character as “Young Man” quite regularly. I know it’s a series tradition that the MC is male unless you’re playing a spinoff visual novel with RPG elements, but their look is so androgynous that I thought I’d be able to pretend they were a “bifauxnen.” Script issues aside, what the actors had to work with they pulled off extremely well. There’s also a lot of rocking music, especially on the battle themes. They could get an entire album out of the battle themes here. 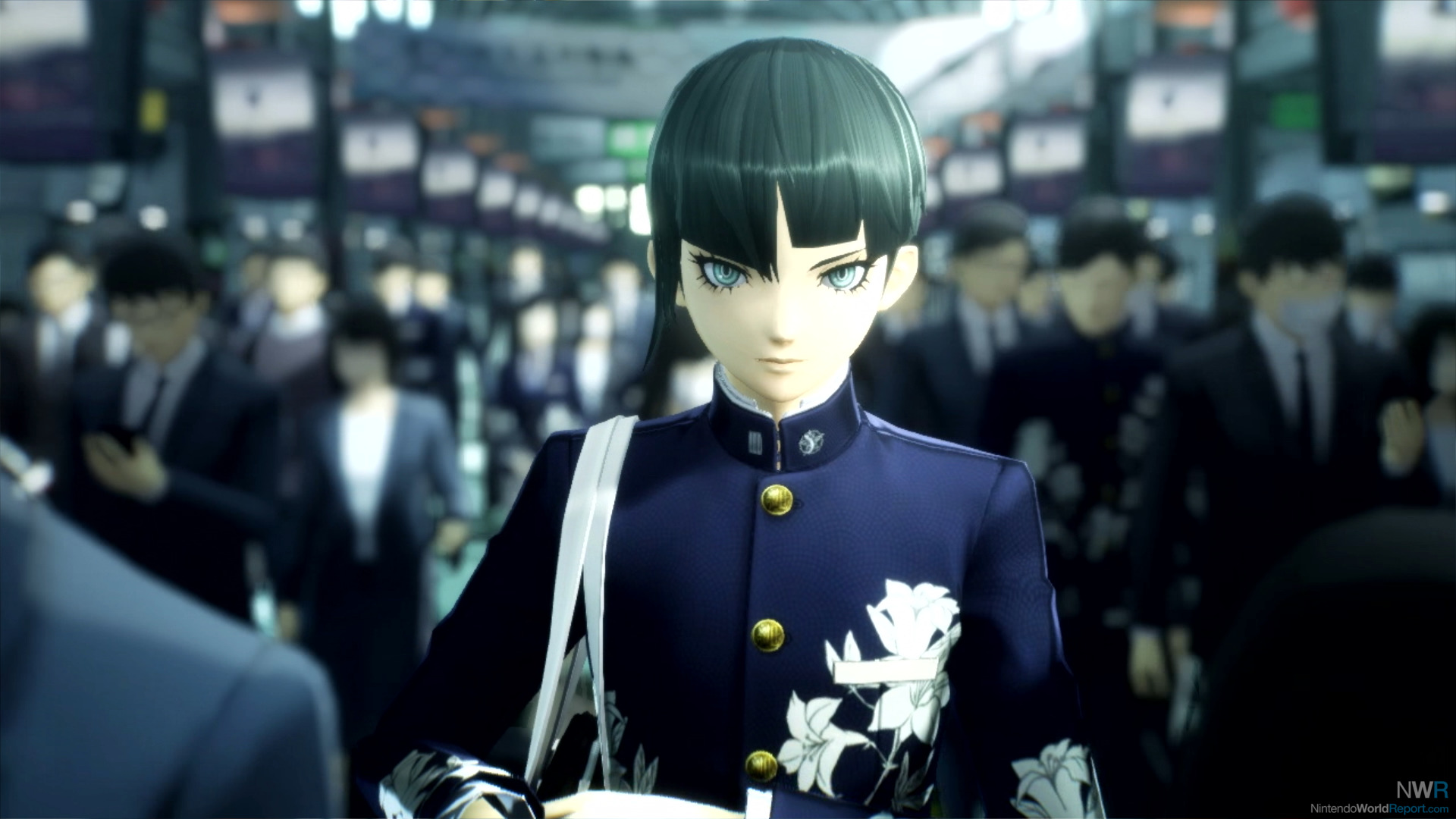 Bifauxnen (bee-foe-nen) (n) Person who looks like an anime pretty boy but is actually female.

Now that we’ve finally closed the book on the 2017 Switch presentation, I think Shin Megami Tensei V might be my favourite game to emerge from that show. That’s not a comparison I make lightly given the other games that appeared that night, but for my money and time it was worth the wait. Pokemon might be ending the year of RPGs on Switch, but SMT V is the best monster catcher for your buck yet.