Nata de Cotton sure is making her presence known on the Nintendo Switch. This previously obscure character now has five entries available in the eShop, including the recent Cotton Reboot! and Cotton 100%. Panorama Cotton—originally released in 1994 for the Sega Mega Drive—changes up the series’ side-scrolling shmup gameplay by giving us a 3D view of the action, but it’s not necessarily a change for the best.

I’d like to set things up with the story of Panorama Cotton, but I’m afraid I can’t read Japanese. Although the interface has been translated for Western gamers, the script has not. A patch will apparently address this soon. In the meantime, the eShop contains a summary if you want to read it, but there’s really not much of a point. Panorama Cotton is all about the arcade action, as evidenced by the way it just tosses you straight into it.

This rail shooter requires you to zip around the screen to position the enemies between yourself and the focal point of your weapons. There are many of said enemies, and they come hurtling towards you quite quickly. 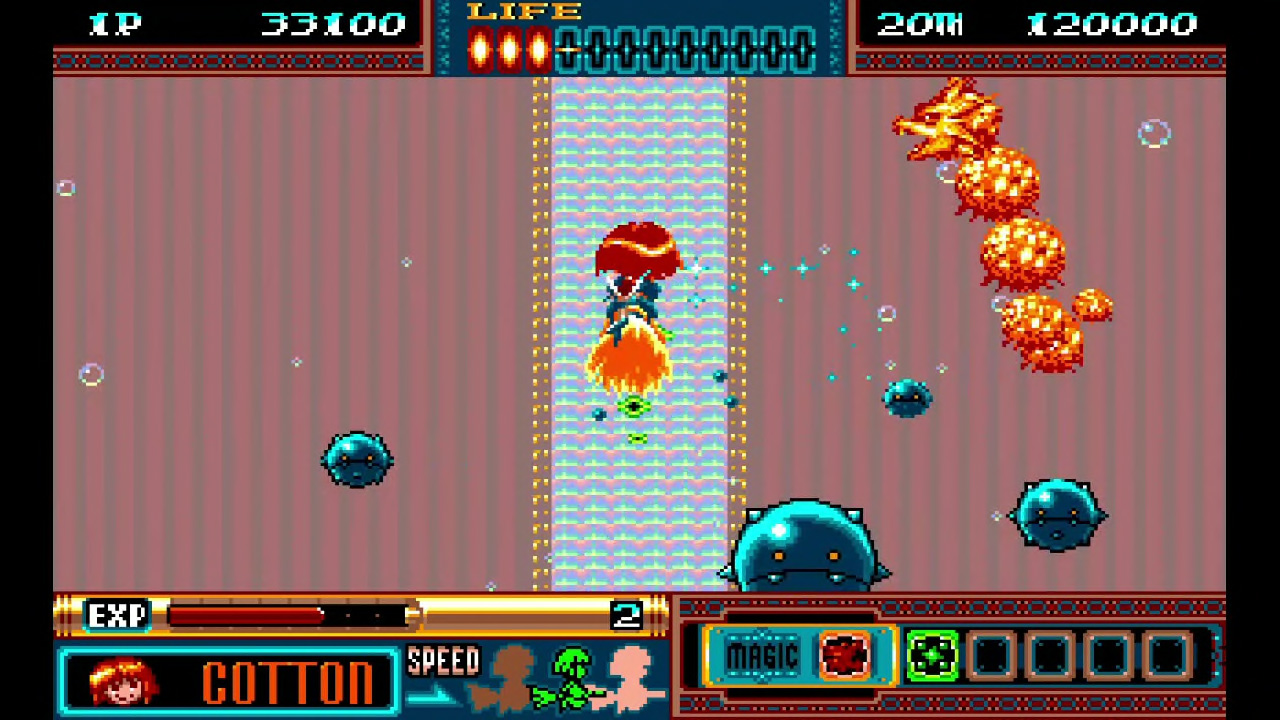 Your standard weapon can take out most, but you’ll also need to correctly time the usage of your more powerful magical attacks. Determining what you can hit and what you should just attempt to avoid is important, but this is easier said than done. There are often so many objects on the screen that it becomes overwhelming to simply look at, let alone attempt to clear out. Some obstacles cannot be destroyed, and there’s a delicate balance between maneuvering around them while trying to line up your shots. Memorization helps, so you’ll learn when to move where after playing levels a few times. Thankfully, Panorama Cotton’s controls are smooth and precise to ease that process. 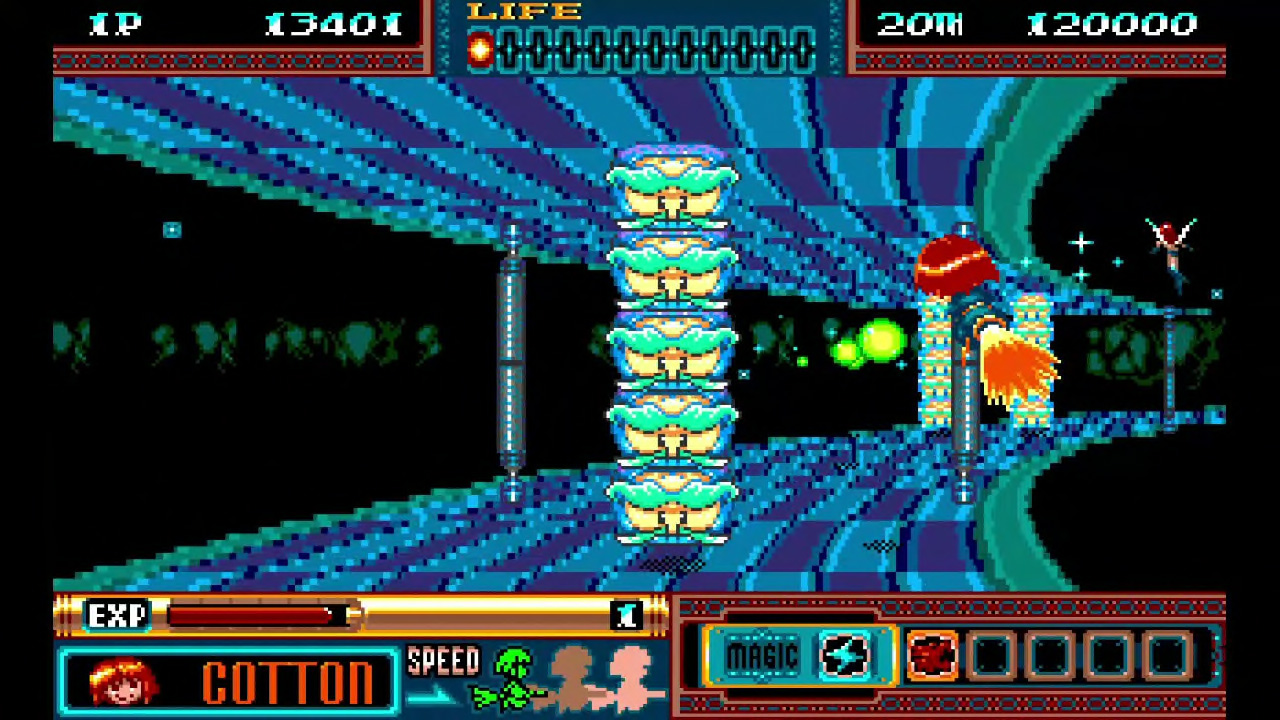 Difficulty is also eased by some updates in this release. You can play in Challenge Mode, which is basically just the original version of the game, or you can go with the new Standard Mode. Along with the typical port enhancements (such as the ability to save your progress) comes a rewind feature that allows you to work your way around your mistakes. Once you’ve completed Challenge Mode, you also get access to cheats. Although, if you can beat Challenge Mode, do you really need them?

I generally like the game’s visual approach—specifically, the hallucinogenic colors and the freaky enemy designs—but it comes with problems. First, the graphics quickly become harsh on the eyes. This is not a game you’ll want to stare at for any length of time. Second, the enemies and obstacles flicker too much and seem to pop up out of nowhere. The flickering issue is exacerbated by UI items that needlessly blink, too. A lot of items on the screen are there for visual effect only, and I feel that pulling them out would’ve eased the presentation problems. 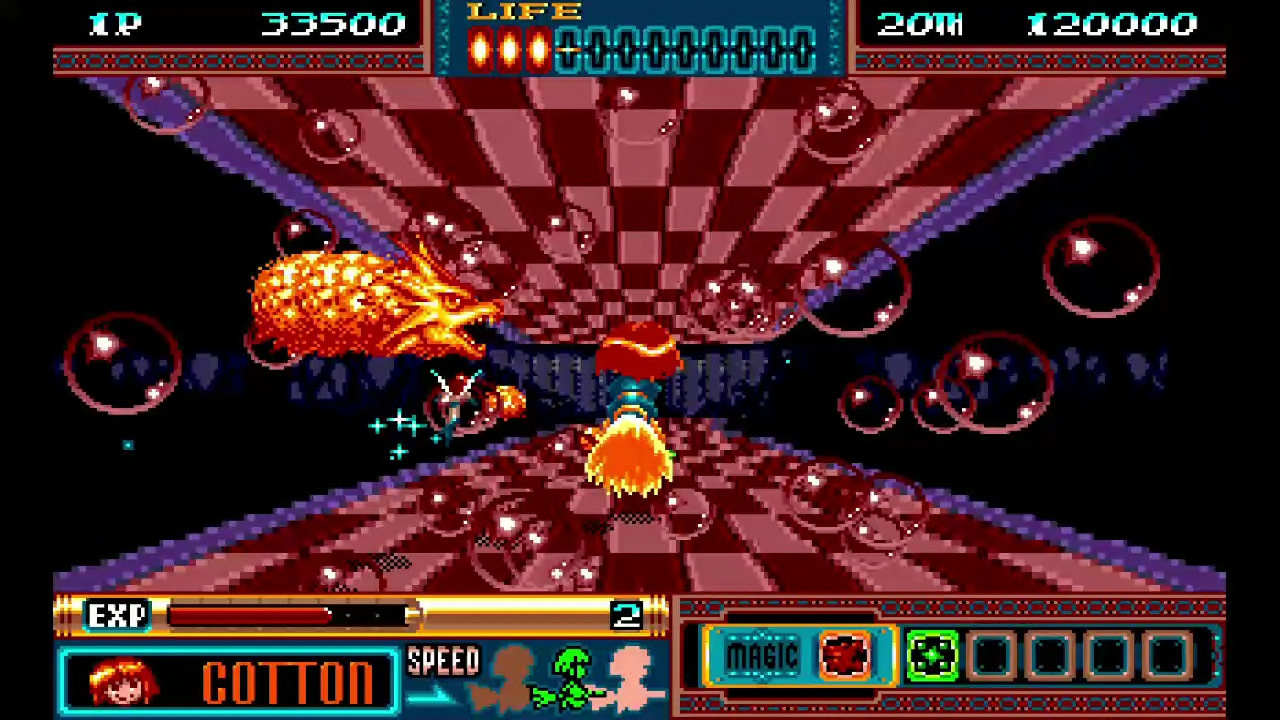 If this is the way the game performed on the Sega Mega Drive, I suppose purists will welcome all of this. I never had a Sega Mega Drive, so I don’t. The ’90s visuals and wonderful soundtrack provide enough nostalgia that some modern optimizations wouldn’t have interfered with anyone’s childhood memories.

If you’re new to the Cotton experience, I recommend going for Cotton Reboot!. In addition to being a superior game, it’s also more true to the series. Panorama Cotton is better left for series completionists.