One of the things I love most about JRPGs is the melodrama. The stories are so ridiculously complicated, and the characters are so over-the-top, that it’s just a blast to get swept up in it all.

Is it ironic, then, that I enjoyed Blue Reflection: Second Light as much as I did? This isn’t a game of mech or mystical militaries fighting against rogue gods. It’s the story of a group of young women learning about who they are and how they fit into a world they don’t understand. And I’m not ashamed to say I have more in common with that than the guys who fight the gods.

Second Light is the sequel to 2017’s Blue Reflection, which was released for PS4 and PSV. There was a spin-off anime, too, but I don’t feel you need to have worked through either to play Second Light. There was no point that I felt I lost on something the game wanted me to understand.

The story centers around Ao, a young student who suddenly finds herself at an abandoned (but kempt) school surrounded by an endless ocean. Although Ao remembers who she is and from where she comes, the other “students” at the school—Kokoro, Yuki, and Rena—do not. They’re given some details by ReSource—a mysterious participant in their group chat—but are otherwise on their own. So, what do they do? They come together to figure things out and get stuff done. 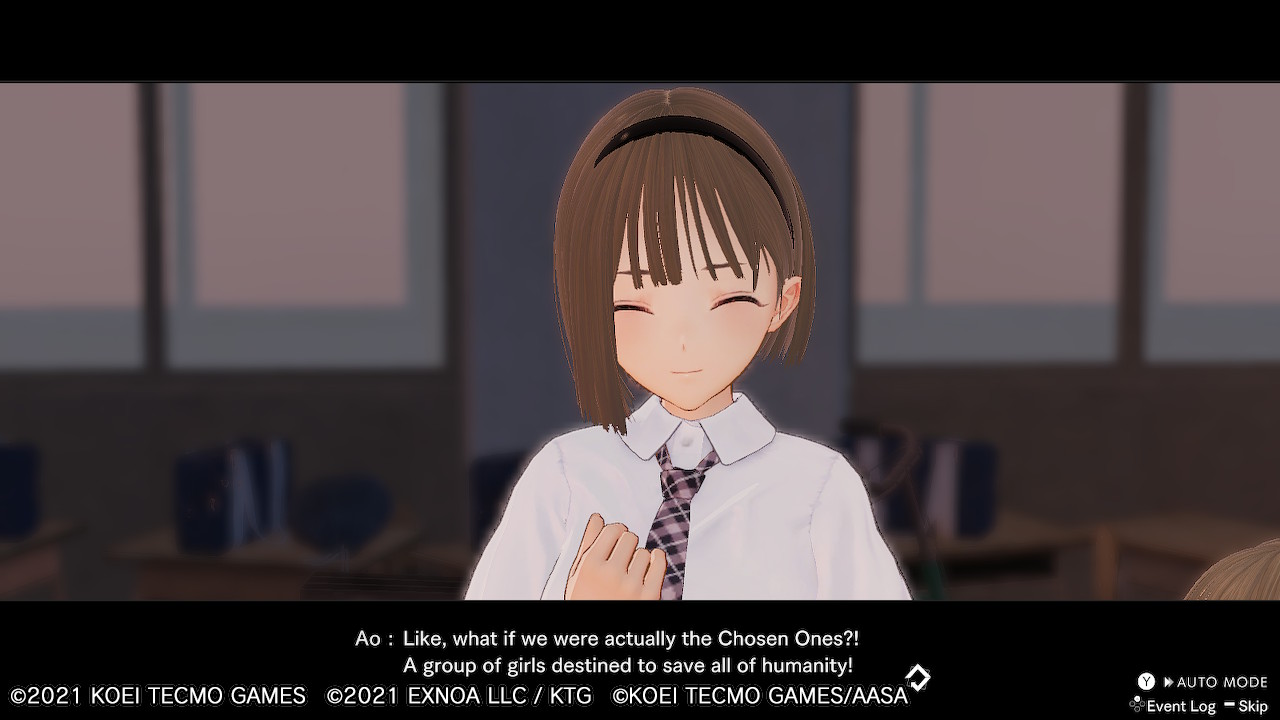 That’s the crux of the story, really. Whereas it’s not uncommon for JRPG stories to involve a band of heroes joining together to fight, Blue Reflection: Second Light makes that support network the focus. When these college girls (well…one bit of dialogue refers to them as college girls, so we’ll go with that) leave the island to explore, they’re venturing through their memories. One by one, each character explores her past to recall key events that happened before finding herself on the island. These memories usually center around a specific person, and that person then joins the group. Why? Because most were at one point a Reflector—a girl with magical abilities that don’t seem to change much other than add some flair to her school uniform. 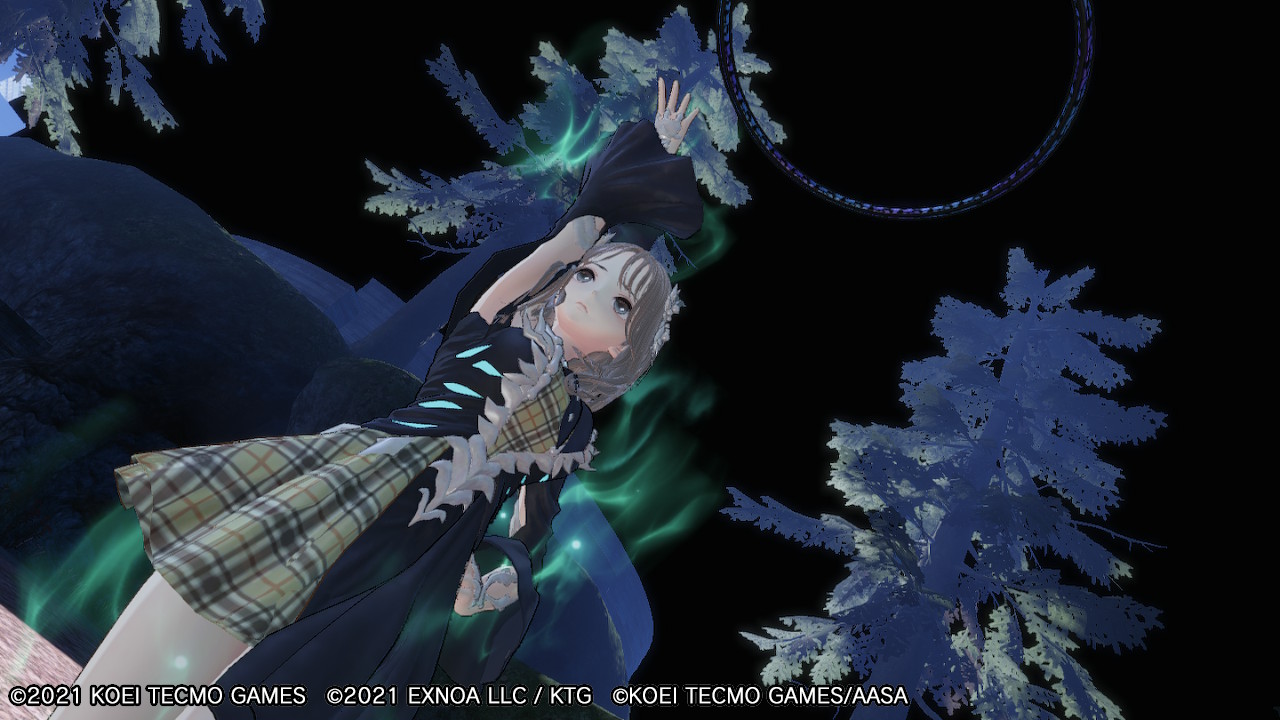 It would all be formulaic, except the game doesn’t lean as heavily into adventuring and combat as your typical JRPG. Between exploring these areas (eventually referred to as Heartscapes), Ao and her friends seek ways to connect with each other and better their living conditions. They miss certain meals, so they research and build food stalls. There’s a leak in the roof, so they learn how to effectively patch it up. Most of this centers around crafting, as they need specific materials to complete these jobs. The game unlocks craftable items as necessary. If you don’t already have the materials to make them, you’ll need to explore the Heartscapes (or just look around the school) to get them. 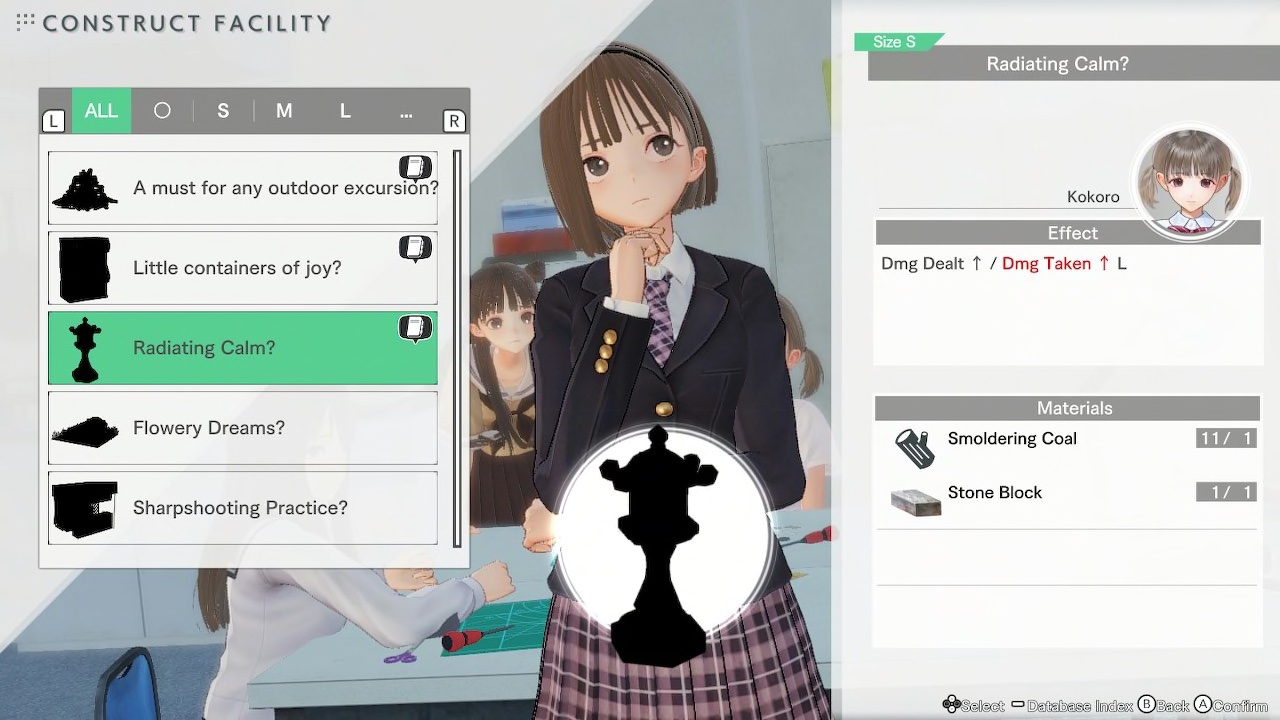 The coolest thing about this is that every item you’re tasked with building affects the gameplay. A flower bed, a tent, a water heater, a swing set—all boost your combat abilities in some way. How could a coffee stand actually make you a better fighter when you’re nowhere near it? Because coffee’s important, damn it! If it brings you happiness, it’s good for your mental health, and that helps you confront your demons.

The support network doesn’t end with objects. Throughout the game, Ao goes on “dates” with the other young women. These generally involve just walking around the school to find various events to read through. At the end of them, however, you’ll be able to increase your relationship, thereby unlocking additional skills and abilities to take into battle. You will unlock fragments that provide passive combat power-ups (stronger attacks or defense, ailment resistance, etc.) to their assigned character. There are a lot of these to manage, and using them to enhance a character’s natural abilities or compensate for her shortcomings requires some intricate strategies.

And that’s the deceptive thing about Blue Reflection: Second Light. Although it mostly comes across as JRPG lite, the party configuration runs surprisingly deep. It helps that the combat is fun, too. The game uses a real-time battle system in which your three active characters slide up a turn bar. The further they slide, the more (or more powerful) commands you can assign. They’re able to move further as the battle continues, but going for the more powerful attacks means you’re waiting longer to execute them, making you vulnerable to enemy hits and debuffs. You’ll always control the central party member, and you can determine whether to control the other two or let AI handle it. I found that manual control didn’t prolong the battles by much, so it was my preferred method throughout. 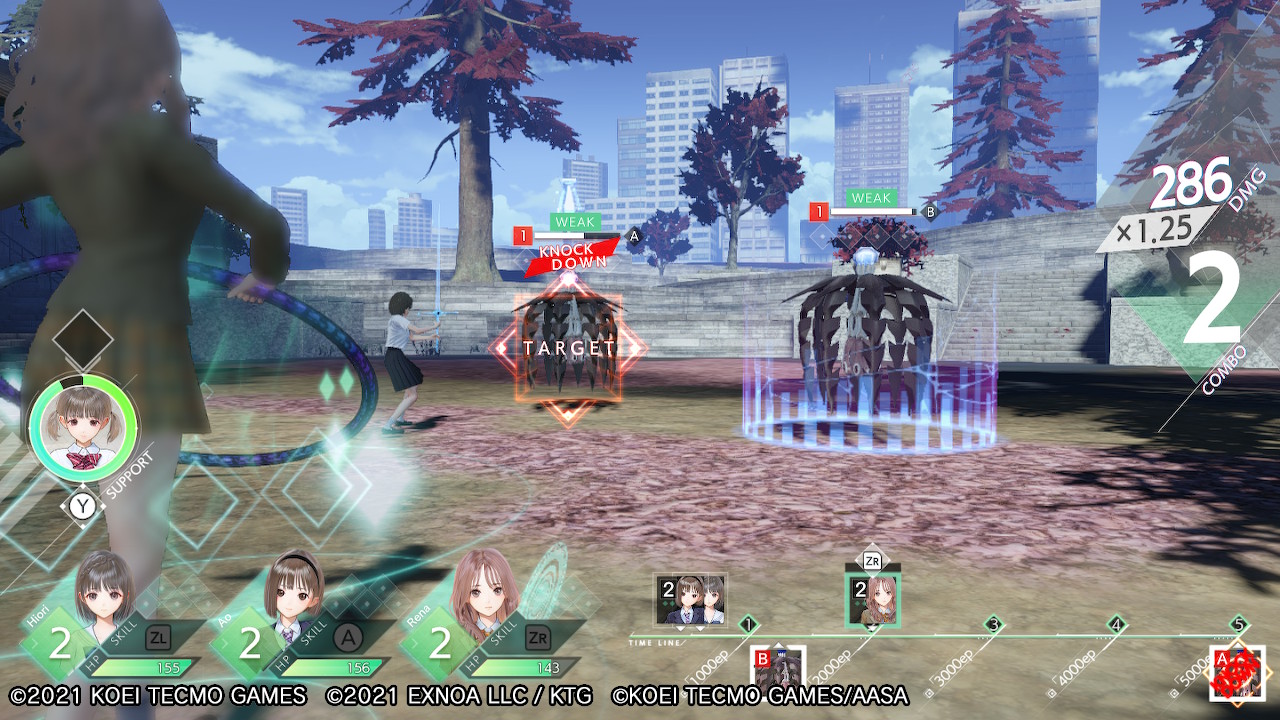 Having the characters attack at once can improve the power of your combos. Those combos are extremely important in boss battles, as the damage gets higher as your combo count rises. If an enemy is able to break your combo chain, you’ll find yourself relatively powerless until you’re able to build it back up.

Of course, you can also choose to inflict buffs/debuffs or heal, depending upon the characters’ abilities. Your support character helps here, as well. In addition to having her provide preset buffs/debuffs as her turn ring completes, you can manually have her use a crafted item to help out the team. She can also be swapped in to fight, which can be extremely helpful when you find your default crew can exploit enemy weaknesses. The support player can even jump in for an incapacitated ally, although that ally will not be able to provide support.

The whole system is very fast and very fun, although it does get repetitive. The different Heartscapes tend to focus on a specific type of enemy, and each battle is pretty much the exact same thing as you push through. Thankfully, the developers break this up in two ways.

First, some levels have a stealth element to them, so it’s not always about combat. Second, you’re not always there to just fight. You work through the Heartscapes to recall characters’ memories, so there are items to find and memories to uncover as you progress. 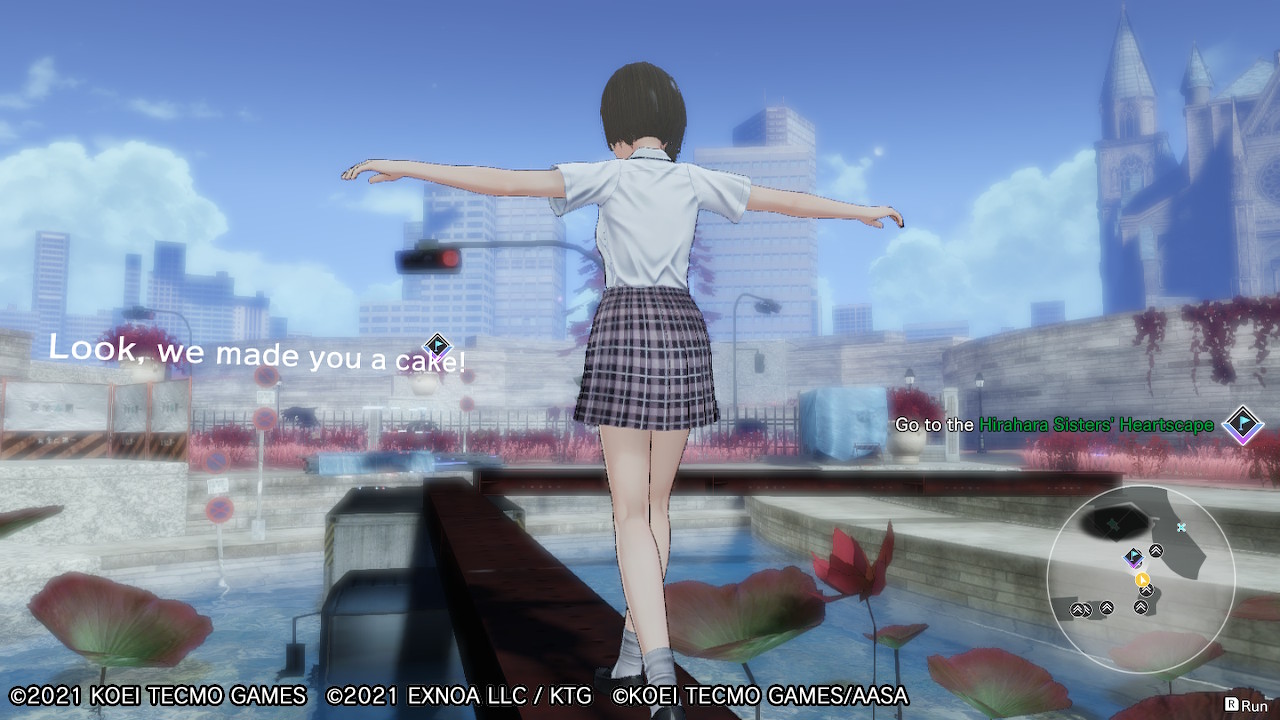 Returning to them to farm for materials slows things down, but exploring them the first time was generally quite compelling. And it helps that they’re all so wonderfully designed. Each Heartscape has a different theme that centers around the character’s memory, and the fragmented, somewhat surrealistic designs are captivating.

Unfortunately, a few elements do prevent Blue Reflection: Second Light from reaching the heights it could have. Load times are longer than they should be, for example. Repetition starts to set in pretty quickly. And although the game does a decent job of moving you around its world, it could be clearer on getting you where you need to be. It will show you movies of new Heartscape areas unlocking, for example, but then not show you on the map where that area is. It’s also needlessly vague on pointing you to crafting materials. Fighting the same demon a dozen times in hopes of finding a specific item feels like a slog. 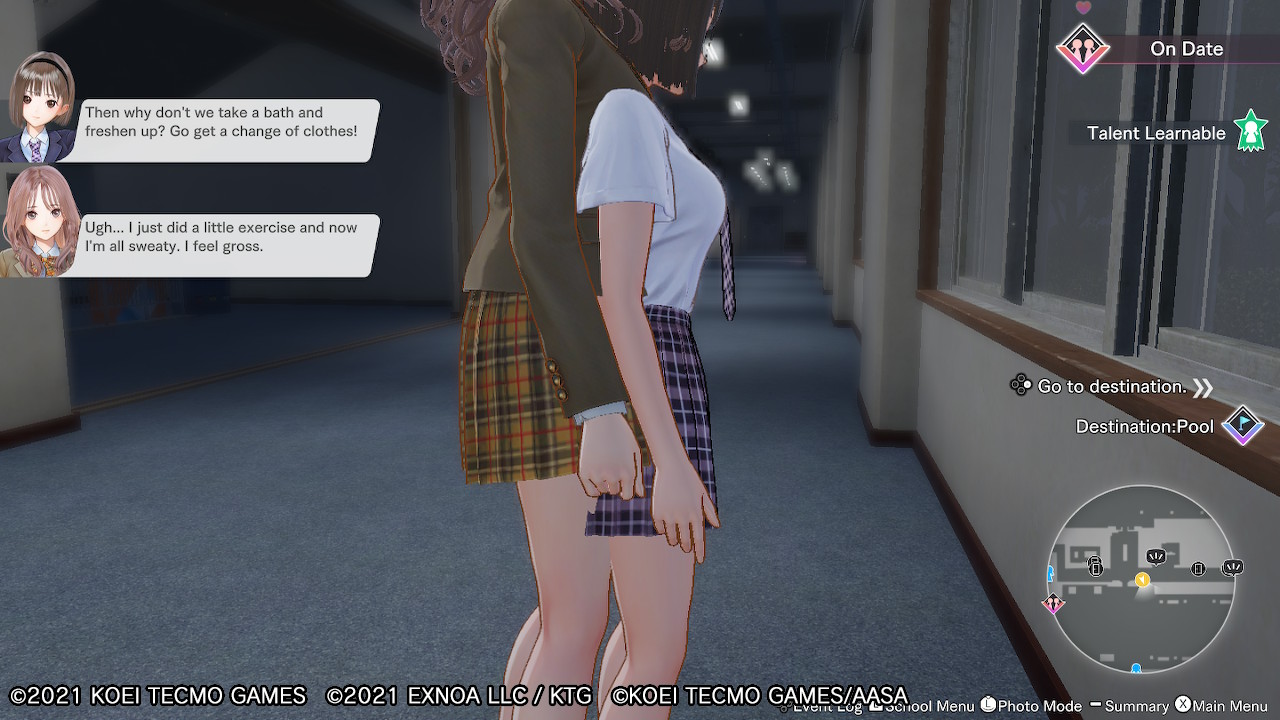 More importantly, there’s a definite disconnect between the way these young women are presented. Thematically, they’re smart, strong, empathetic, and quirky. Blue Reflection: Second Light is a great example of how a game that focuses on female characters can be fun for anyone to play. Visually, however, they’re displayed with typical fanservice, and we get the usual flirty comments that often seem out of character. It never moves beyond its T rating—and it has apparently been toned down from the original game—but it still felt unnecessary.

The fact that I’ve used so many words to review Blue Reflection: Second Light is a sign that there’s more to this game than you might expect. The mystery of who these young women are and why they are called together builds quite nicely. And although the crafting and combat are deep and well-integrated, neither is hard to figure out. If you fight every monster on the map as you work through the Heartscapes, you’ll be able to play through the game without the need to level-grind. And even if you do have to, the touching story and fluid combat system are compelling enough to drive you through.

If you’re still not sure if the game’s for you, the downloadable demo will show whether you can connect with Ao and her friends as they fight for their memories and each other. 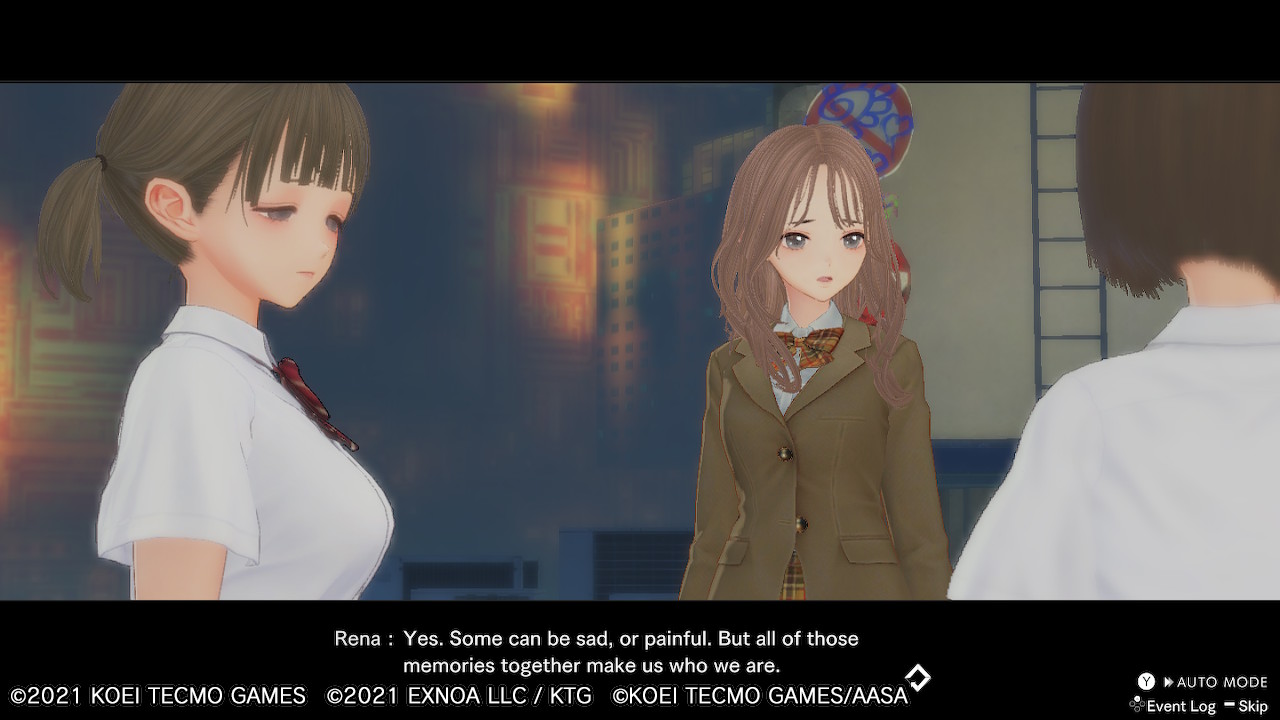 And you’ll get a bunny hat. Crazy kids.