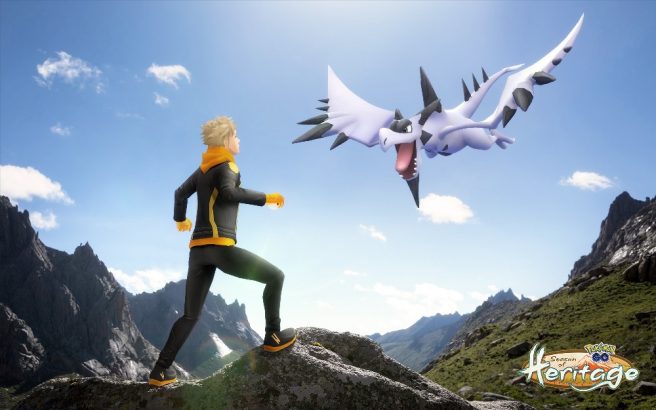 The company is gearing up for a new Mountains of Power event, which continues the Season of Heritage. Niantic teases: “Spark’s intuition leads him to believe that the mysterious door’s second mechanism requires the help of Rock- and Steel-type Pokémon to unlock it. Journey through terrain reminiscent of the mountains found in regions like Johto and Sinnoh, and work with Spark to unlock the next mechanism!”

Other than Mega Aerodactyl, players will have a chance to encounter a Shiny Slugma in Pokemon GO for the first time. Zubat, Machop, Geodude, Nosepass, and Barboach will also be appearing more frequently in the wild. Alolan Geodude, Onix, Ursaring, Donphan, Medicham, Absol, Beldum, Bronzor, and Heatran will be showing up in raids.

There are some other aspects planned as well. During the event, there’ll be a bonus of 1/2 walking distance to earn hearts with your buddy. Also, players can take on Timed Research focused on catching Pokemon, hatching Eggs, and earning Buddy Candy. Tasks can be completed to earn encounters with Pokemon like Mawile and Beldum.

The Mountains of Power event for Pokemon GO will be held between January 7 at 10 AM and January 13 at 8 PM local time.