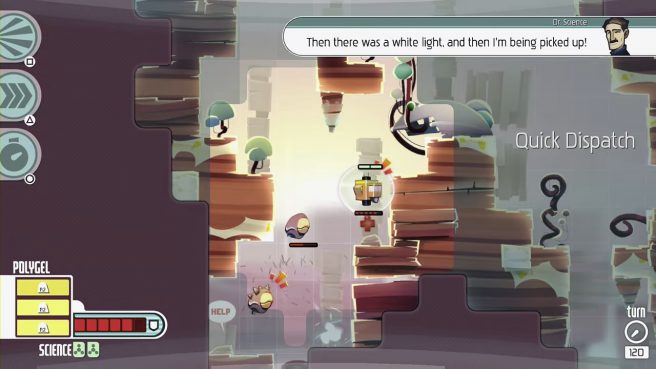 Those of you that owned a Wii U may recall a little game called Nova-111. The sci-fi themed turn-based adventure game, which features a real-time action twist, released on the system in 2015.

It’s now been revealed that Nova-111 will soon be reaching Switch. Funktronic Labs developed the project, though No Gravity Games is handling publishing duties.

Here’s an overview of the title:

Pilot your trusty vessel through mysterious and foreign planets in this award-winning sci-fi-themed turn-based adventure with a real-time action twist. Your mission: fix space-time and search out the scientists lost in the aftermath of the Universe’s greatest experiment. Aided only by your trusty (if somewhat sandwich-obsessed) guide, you must repair the temporal vortex!

Activate 100% of your brain and solve mind-warping puzzles! Engage in strategic battles with bizarre astrobiological creatures in a twisted environment where the turn-based world and the real-time world collide.

Progress through three beautiful, distinct worlds! Protect yourself by collecting new abilities and upgrading modules for your ship. Whatever you do though, never forget that your greatest weapon is always SCIENCE itself!

▪ Your turn! But my turn as well – Innovative mix of turn-based and real-time gameplay.
▪ Preparation is not cheating – Fight smart. Brain beats brawn.
▪ It’s not a space headache – Mind-warping puzzles designed to melt your brain.
▪ Stare in awe – Beautifully-crafted planets each with its own unique enemies, environments, and strategies.
▪ Unlimited power! – Use special lasers or abilities like the TIME-STOP to bend time to your will.
▪ To go even further beyond – Collect a multitude of upgrades and modules for your ship.
▪ When you go high, the music goes higher – A dynamic soundtrack that adapts to your play style.
▪ SCIENCE! – Because who doesn’t like scientific progress?

You can watch a Switch trailer for Nova-111 below.

The Latest News on Nova-111 reaching Switch in January