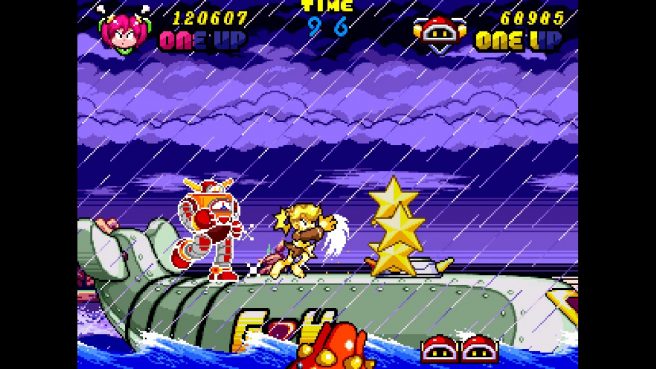 Gameplay has come in for Clockwork Aquario, the previously lost arcade game that will now be appearing on Switch in December.

Here’s some information about the game:

The long thought lost arcade treasure by the legendary Westone team is finally being brought to light after 30 years! In cooperation with Strictly Limited games, the unfinished ROM has been dug up and finished with the input of the original developers. The beautiful pixel art was at the top of its class at the time and has lost nothing of its charm over the years.

Jump and run through a colorful fantasy world, pick up and throw your enemies, hit multiple at the same time to get a multiplier and rack up your high score! You can also play with up to two friends, will you collaborate to take down Dr. Hangyo or try to sabotage each other to get the high score?

• The arcade classic revived officially and complete for the first time!
• Imaginative levels with beautiful pixel graphics!
• Easy to pick up, addictive side-scroller action!
• Gorgeous soundtrack by Westone legend Shinichi Sakamoto!
• Includes a gallery with concept art and other goodies!

Take a look at the gameplay for Clockwork Aquario in the video below.

Clockwork Aquario is planned for a December 14 release on Switch. It will support English, Japanese, French, German, Italian, and Spanish language options.

The Latest News on Clockwork Aquario Switch gameplay – Nintendo Everything