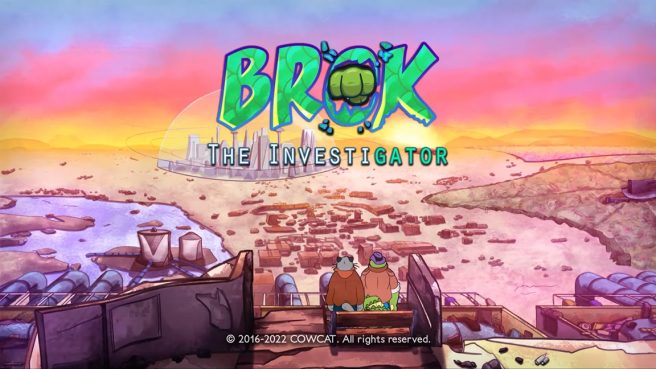 Cowcat has issued a new “Anniversary” trailer for BROK the InvestiGator, its upcoming narrative-driven game featuring a mix of action, puzzles and investigation. The project is currently in the works for Switch and other platforms.

For more on BROK the InvestiGator, check out the following overview:

“Brok” is a narrative-driven game that blends action, puzzles and investigation in never-before-seen ways. Will you use your brain… or your brawn?

In a futuristic “light cyberpunk” world where animals have replaced humans, privileged citizens live under a protective dome from the ambient air pollution while others struggle to make a living on the outside.

Brok, private detective and former boxer, lives with Graff, the son of his deceased wife. Although he could never elucidate the nature behind her accident, recent events may shed some light on an even more tragic outcome… one that may be linked to their own existence.

Will they be able to withstand the threats of this corrupted world and face their own destiny?

A deep and emotional narrative-rich experience filled with characters reminiscent of classic 80s/90s cartoons.
The first game to combine a “Classic Adventure” with “Beat’em up” and RPG elements!

Have a look at the new BROK the InvestiGator “Anniversary” trailer below.

BROK the InvestiGator will appear on Switch in 2022.

The Latest News on BROK the InvestiGator “Anniversary” trailer