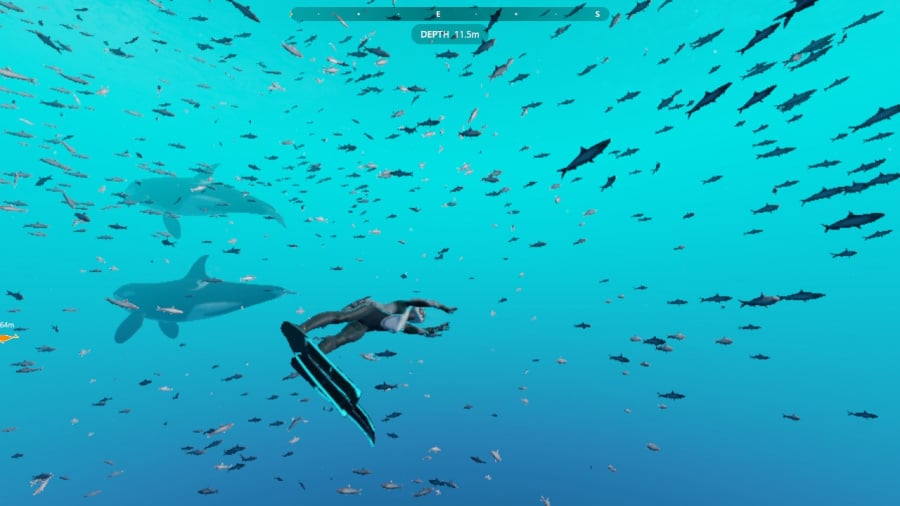 Imagine you dragged yourself into a boring marine biology lecture and it turned out to be an awesome rock concert about dolphins. That’s the edutainment promise and it’s more or less what E-Line Media seem to be aiming for with Beyond Blue – but with a cool video game instead of the rock concert. There’s some serious cred borrowed from the BBC, with an “inspired by” name-check for superstar documentary series Blue Planet II. However, Beyond Blue is nowhere near the calibre of that programme. The great power of a game to show and teach has been mostly overlooked in this collection of good but disjointed multimedia assets.

E-Line Media’s latest is a peaceful, third-person ocean exploration game about conducting scientific research into marine life. More than just a game, the package also includes 16 short educational films of around two minutes each, briefly describing related scientific topics. In line with this academic stance, there is no threat or jeopardy in the gameplay, encouraging ruminative observation of the environment and the creatures in it. 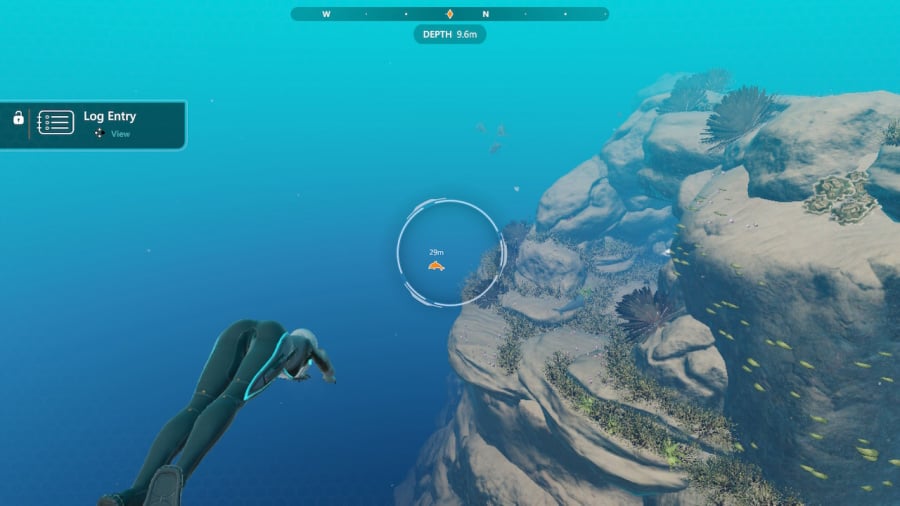 Set in the near future, you control a researcher called Mirai as she tracks and documents ocean creatures, particularly a family of sperm whales. She undertakes this research with an offscreen team of scientists who livestream it, commentate and relay questions from viewers. This is not so chatty as to spoil the tranquility of the deep, but does give context to the onscreen action, which might otherwise get tired quickly. Between research missions, Mirai hangs out in a submarine where you can listen to a very odd collection of music and watch science videos, while episodes of her personal and professional life play out over the phone in visual-novel-style voiced dialogue interludes.

Controls are mostly intuitive, with standard two-stick movement, plus additional buttons to ascend or descend without pointing the camera up or down. Doing research means activating a scanner with ‘L’, pointing a reticule at a creature, then holding ‘R’ to scan. The requirement to get within range of the creatures and to track them with the camera as they move makes this feel different each time, avoiding the sense of a bland clickathon. Each dive involves interacting with a buoy to scan for targets, then swimming to the targets as marked on your HUD to scan the subjects of your research.

There is total freedom to explore the small dive sites in which you are placed – the “near future” being the excuse for technology that allows Mirai to swim indefinitely with extremely minimal gear in water of any depth. Getting Mirai to interact with items on the sub is a horrible chore, but a brief and infrequent one. Thankfully, she’s almost always in the water. 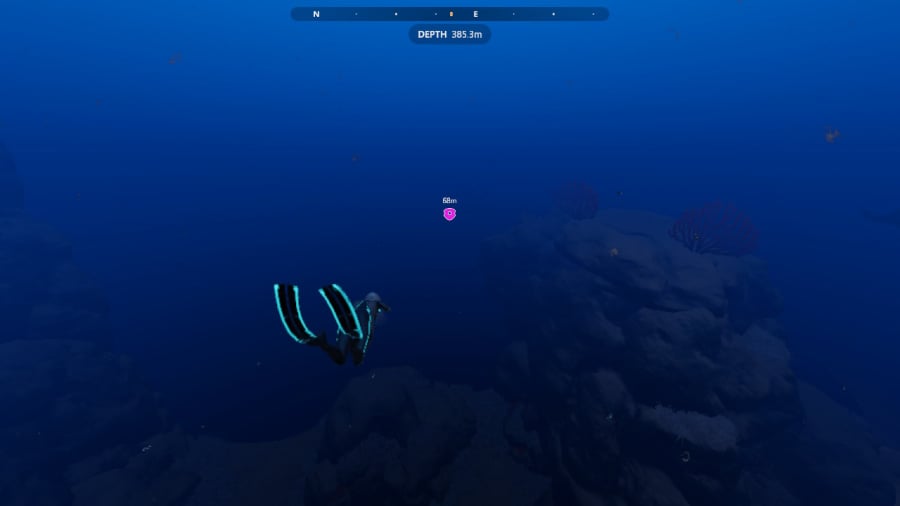 Beyond Blue clearly intends to be educational. Apart from the factual documentary videos collected in the menu as you progress, the missions include spoken explanations of undersea life and primarily involve observing and simply taking in what’s presented. The concept provides multiple channels to show, tell and teach: the exploration, the dialogue sections and the videos. The out-of-ocean story is designed to draw parallels between the lives of humans and other creatures and to show the commonality of family bonds and social structures. Conversations with your sister about your loved ones are layered with the tracking and documentation of a family of sperm whales. Meanwhile, the gradually unlocked videos lend gravity to the environments of the game by grounding them in reality.

There is a lot of content coming together here to try and achieve a purpose. However, it doesn’t really gel. The videos sit in a tab of the menu and are revealed with minimal fanfare. Given how short they are, they could be played at the start and end of missions without being bothersome. That would make fuller use of them, but it would probably also highlight the fact that they don’t relate very neatly to the content of the missions. Likewise, the dialogue sections don’t really get very far in terms of dramatic momentum, and the ties to the sea life are trite and cloying. It doesn’t help that between the voice acting and the editing, the interactions feel flat, like hearing sound files cued in sequence rather than a human interaction. 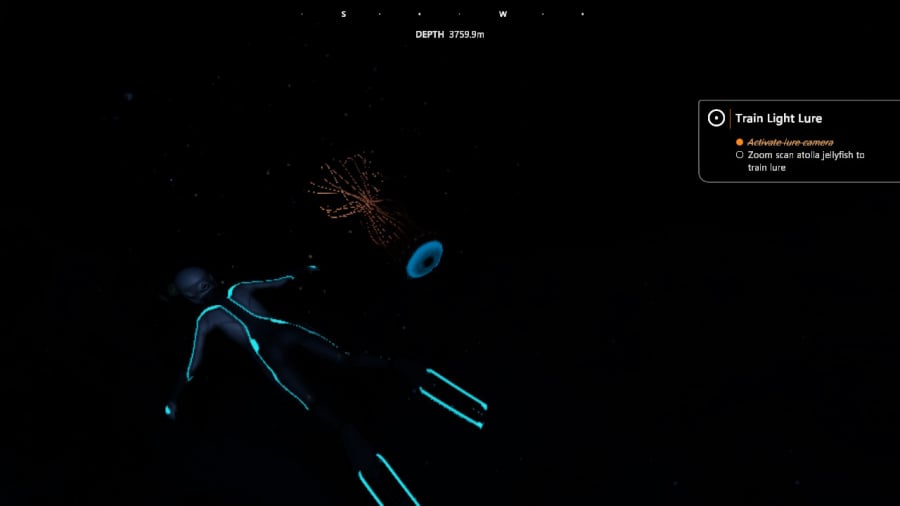 The ultimate encapsulation of this overall disjointedness is the music player on the submarine. Having emerged from the wonderfully recreated sounds of the ocean, the massive iPod in the cabin seems to be cranked up way too loud, and has a small but wackily diverse playlist that cannot maintain any kind of coherent mood – and certainly not a suitable one. There seems to be an attitude of just collecting these songs together — and these videos and these voice clips and these levels of a game — just because E-Line Media could. It’s multimedia for multimedia’s sake, like a CD-ROM on a beige PC in a regional science museum in the ’90s. It feels oddly like a game set in Microsoft Encarta.

Amid all of that, there is a third-person exploration game. Sadly, it is not a great one. While it controls smoothly and is generally pleasant to play, it misses some basic opportunities to do more. The level design has its moments – swimming towards the first whale encounter and over a sudden drop in the ocean floor is almost like leaving the Great Plateau in Breath of the Wild. However, other potentially majestic moments in awe of the vastness of the ocean are scuppered by pop-in, revealing that the stomach-churning emptiness of the blue void is in fact full of big rocks that haven’t been rendered yet.

Perhaps the greatest missed opportunity is in moving to the deepest depths of the ocean. This experience is barely appreciably different from any other dive – it’s just darker. If Mirai had to wear a slightly chunkier suit and controlled a little more sluggishly, we could be prompted to feel the oppressiveness of the extreme conditions. This is the kind of thing video games do uniquely well. That feeling combined with a well-timed video about the nature of the super-deep ocean would have been powerful. Instead, Mirai flippers about as merrily as ever and another video pops up on a buried menu tab in case you feel like watching it later.

Beyond Blue has noble intentions, with an urgent and vital message about our impact on the Earth. However, it doesn’t do itself justice. Although there is some decent content in here – videos, music, sound design, gameplay, narrative – those parts do little to support or enhance one another. Gameplay is soothing but one-note, the video documentaries don’t frame the missions and neither are well connected to the narrative. While there are moments of majesty in exploring the ocean, the limited draw distance and pop-in frequently interrupt the awe. Edutainment’s a hard one to pull off, and Beyond Blue feels less like an awesome rock concert about dolphins and more like your science teacher trying to do a rap.

The Latest News on Beyond Blue Review (Switch eShop)